skip to main | skip to sidebar

You know what I don't get - and, I ask, do you get this? The federal government is outlawing Thomas Edison's cheap source of good illumination, the incandescent light bulb, but is not banning the sale of water heaters as sold in their present, apparently incomplete and energy-wasting - not fully insulated - form.

If, as our elites keep lecturing us but are doing precious little about it, the US national goal is reduction of energy consumption as a means of attaining national energy independence from foreign sources, then why are water heaters sold without those aftermarket insulating jacket kits. You know, the big awkward horse blankets of plastic-sheathed fiberglas insulation that energy experts and every HVAC dealer in the land urge us, if we are really concerned about slimming down our gas & electricity consumption and bills, to bundle and tape round our water heaters. Why, then, is our federal government's chief (ir)responsible agency, the DOE, not banned, or proposed legislation to end, the sale of halfway-insulated water heaters , and begun the New Energy Progressive Era of properly factory insulated, or upon-installment fully insulated, water heaters?

Isn't this also true of other halfway-efficient appliances? For instance, why aren't maximally efficient new-manufacture refigerators, washers, dryers, computers, TV's, HVAC systems the only government-permitted types to be sold? But then none of those appliances can be made more efficient by their owners applying, as to water heaters, an aftermarket energy-conserving add-on - which is why the lack of legislation forbidding halfway-insulated water heaters just seems to stand out as peculiarly ignorant and absurd. Where is the Obama administration's Water Heater Full Factory Insulation Czar?

Of the incandescent light bulb ban US Energy Secretary Steven Chu said last Friday, "We are taking away a choice that continues to let people waste their own money." Here's a tip, Mr. Secretary: how about banning consumers' non-choice of being forced to buy inadequately insulated water heaters that make people, you know, "waste their own money"?

It doesn't hurt to ask, does it?
Posted by Auntie Analogue at 11:41


To the tune of The Beatles' "She Loves You":

If you think your sext is prive,
well, we saw it yesterday.
It's you it sure describes,
and despite the lies you say-yay
We know it's Weiner!
Can't mistake that that you're so bad!
Weiner, it's you, man!
You don't care your act's so sad!

You know those shorts are yours:
that's your weiner dangling there.
Unwise of you to sext...
the jail bait - you don't care!
And then you lie, man!
The world knows you're a cad.
Then you lie more, man!
even though your wife's so sad.

If you think you've got our votes,
you'd better think again.
Your lies have exposed you:
now we know your sleazeball game!
Because you lie, man!
The game is up for you.
Yet you lie more, man!
Don't give a damn who you have screwed!

As transparent as glass
was your apology.
No one believes you any more:
blame your insincerity!
Because you lie, stud!
No one trusts your phony ass.
Because you lie, dude!
Now your district's up for grabs!

Three days since my old PC, that used Microsoft XP, died and I replaced it with a new PC that uses Windows 7. Microsoft, when they imposed Windows 7 on unsuspecting customers, are bastards.

They even managed to fuck-up solitaire: it wasn't broken, but they went ahead and "fixed" it, "improved" it, anyway. They made a clear simple fun game so bizarrely over-busy so that I don't enjoy playing W7 solitaire - because it hurts my eyes just to look at it. Its over-busy design elements (cursor-on halos round cards; stupid outlines around cards and permanent outlines around even the empty spaces where you know very well cards can and do go - outlines which DO NOT APPEAR on your table top when you use a real deck of cards; horribly busy, needless-sheened-&-shaded, fuzzy-resolution suit symbol, card face and back designs that hurt to look at) and the overall excessively busy visual design hurt my eyes just to look upon the screen. It is now visually painful just to play this game whose earlier design made it fun to play. Not only that, but instead of getting DEAL AGAIN? at game's end, I now see pop-up Third Degree screens that give me a no less than two-step Third Degree just so I can , you know, DEAL AGAIN. Microsoft. Bastards.

It seems that, unlike XP, with this W7 I can't even set another e-mail program as my default e-mail. When I tried to learn how to do this in W7 the Microsoft in-computer and online "support" (Ha!) Full Of Empty Useless Crap screens just sent me round in circles without affording a means to replace - what else! - Microsoft's crappy e-mail program as my default e-mail.

Taskbar: now, instead of instantly reading the XP-style app-icons in the taskbar, Microsoft removed the text on the app-icons which are now, in W7, nothing but dumb fucking symbols...onto which I now must place my cursor to make a mini-thumbnail of the app pop up: so Microsoft took a no-step function and turned it into a 1) move-cursor, 2) wait for thumbnail pop-up, 3) read thumbnail pop-up, 4) move cursor back where I need it to be four step pain in my ass. Nothing like one giant leap backward for mankind there, back to Bronze Age pictographs. Microsoft. Bastards.

Games: they took away pinball which, aside from solitaire (which, as we learned above, Microsoft has now ruined, turned into an implement of torture), was the only other pre-installed computer game I enjoyed playing.

I have lots more serious complaints against Microsoft, but this is a blog entry, not a book in several volumes.

Atop all those serious flaws, W7 has so-called "HELP" screens and links to Microsoft "support" web pages - both of which, as was also true of Windows, Windows 2000, and Windows XP, send you round in neverending circles while never answering your simplest fucking questions. Microsoft. Bastards.

And I'm still waiting for a simple, thoughtful, kind, eminently humane app, or feature, that lets me disable, or reassign, keyboard keys - just so I can disable the endless pain-in-my-ass CAPSLOCK and INSERT keys that daily waste more of my time than I'd waste waiting everyday in the line at the Division Of Motor Vehicles.

Guess what, Microsoft? When in the usual three - at most four- years this new desktop Windows 7 PC dies, I'M BUYING A MAC!

Microsoft, you just insulted and lost a customer, turned her into a Cassandra who will tell everyone she knows how shitty Microsoft products and services are, how worthless and insulting Microsoft "customer service" and "support" are, and how Microsoft holds its customers in utter contempt: I can't even get to talk to anyone at Microsoft, because Microsoft has the gall to let me know (only after I navigated through dozens of their defensive fortifications' screen pages of automated Growing Frustration & Customer Insult & Defeat steps) that for this brand-new Microsoft product I would have to PAY THEM TO TALK TO ONE of their minor "support" employees.

Buy another PC with Microsoft in it? NOT FUCKING AGAIN. Not even with someone else's money.
Posted by Auntie Analogue at 17:15 2 comments:

Now circulating for approval round the US command in Kabul, Afghanistan is a proposal for a medal to be awarded to members of the US armed forces who show "courageous restraint" in execution of the COIN tactics mischosen and misapplied by General Petraeus and his ilk. This decoration deserves to be called what it is: the Doormat Medal. (Other suggestions: the Dhimmi Cross; the Dhimmi Disc; the Yellow Stain [apologies to Herman Wouk]; the I Have Not Yet Begun To Have Been Allowed To Fight medal; the Allahu Akbar Award; the Afghanistan Highway Safety & Transportation Certificate of Demerit; the "Kick Me" medal; the "By All Means, Do Tread On Me" medal; the WAOU [pronounced "Wow."] - Walk All Over Us - award; the Anti-Campaign medal; the Punching Bag Star; the Eat Shit And Die medal; the Why We Don't Fight medal; and the Loser's Badge.)


If this "honor" is indeed instituted, then I will want a custom rug woven in the color pattern of its ribbon, so that each time I enter or exit my home I'll walk all over it and think hard on the lives of our boys and girls surrendered gratis to the enemy - the lives handed, by our spineless "leaders", unnecessarily, avoidably, and unconscionably to the enemy under the horrifyingly misconceived, appallingly inapt, utterly stupid kid gloves COIN "strategy." Nothing like sending the right message to our enemies, is there?
Posted by Auntie Analogue at 10:12 No comments:

Congratulations to the people of Arizona for having succeeded at getting their elect to pass the state's new law which adds checking suspects for US citizenship to law enforcement's brief. Of course the Beltway bien pensant and the we-know-what's-best-for-everyone mainstream media elite don't like the new statute. But with one in ten American citizens out of work our elect-elite seem awfully blasé about having swarms of illegal immigrants - invaders, to be precise - pour onto our soil to debase the coinage of US citizeship and to make of themselves and their progeny yet another burden to be borne by US taxpayers.


The new law embarrasses our Beltway elect because it gets Arizona state employees to do the job that we're supposed to have the federal Immigration & Customs Enforcement federal agency for. If ICE had been doing its, you know, Enforcement, job then Arizonans wouldn't have had to defend their state's sovereignty.
Posted by Auntie Analogue at 15:36 1 comment:

I'm no fan of South Park because its vulgarity assaults my sensibilities (the best satire needs no help from scatology); and because the shrill puerile voices its "creative team" gives to the show's characters grates down to my marrow. Yet to Viacom, for its dhimmitudinous haste to sanitize South Park's 200th episode of all depictions and verbal references to Mohammed, I must recommed Benjamin Franklin's timeless observation:


"They who can give up essential liberty to obtain a little temporary safety, deserve neither liberty nor safety."
Posted by Auntie Analogue at 20:07 No comments: 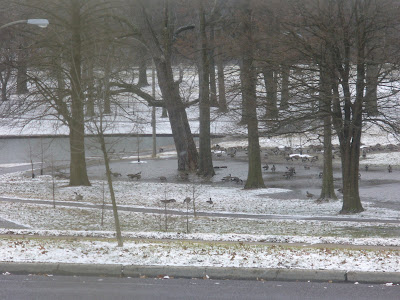 May the grace and peace of the Infant Jesus be yours.
Posted by Auntie Analogue at 13:16 1 comment:

A Few of My Favorite Links